On May 19th 2018, Stop Funding Hate Board member Colin Baines spoke at the Co-op Group’s Annual General Meeting (AGM) to propose our motion on Responsible Advertising. The resolution received overwhelming backing, with 96% of members voting in favour. This is the full text of Colin’s speech:

To introduce myself, I am a long-time member, former Ethics Adviser and Campaigns Manager for the Co-op Group, and a Non-Executive Director of Stop Funding Hate.

As its proposer, it is a pleasure to speak to this member motion.

Thank you to National Member Council for supporting our motion, and congratulations to the 200 other members who backed the motion. And to the Stop Funding Hate campaign for its mobilisation and coordination. It’s no small feat tabling an independent motion.

And well done everyone here. This member motion evidences a healthy democracy in action.

This motion notes the concern of the United Nations and others that some UK newspapers are fuelling and legitimising prejudice and hate crime.

To quote the United Nations, referring to the UK press: “History has shown us time and again the dangers of demonizing foreigners and minorities, it is extraordinary and deeply shameful to see these types of tactics being used simply because racism and xenophobia are so easy to arouse in order to sell newspapers.”

The Sun, Daily Mail and Express have been specifically singled out for criticism.

It is notable that a recent YouGov opinion poll found that 64% of Co-operative Group members believe ‘companies should withdraw their advertising if it is placed next to content they think is racist, sexist, homophobic or xenophobic’; which unfortunately has happened with Co-op adverts.

Members have raised concerns about our considerable advertising budget being used to fund such content. I’m sure the National Member Council will remember receiving sack loads of Christmas cards in 2016 from Stop Funding Hate supporters wishing goodwill to all, all year round.

This motion notes the positive response members received, with the announcement soon after of an advertising policy that sought to influence newspaper editorial.

It gives the Board the opportunity to evidence impact. Otherwise, and preferable, an ethical advertising policy should be introduced that excludes advertising channels that are incompatible with co-op values and principles.

On behalf of the motion’s backers, I can say this would be our preference. After all financially supporting publications that promote hate and division is to undermine co-operation, and is the antithesis of our values. Let’s be honest, the Daily Mail for instance, shares none of our values. As shown by their call last week for an even more hostile environment for immigrants. Not illegal immigrants, just anyone not born here, which includes many of our members, staff and customers. 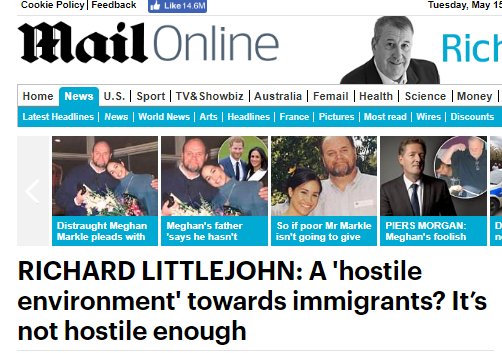 It was very welcome to see a quote from our CEO Steve Murrells at the NUS annual conference last week stating: “We have no fear of using boycotts as a mechanism to support our membership”. And I also thank the Board for not opposing this motion.

I should clarify however that an ethical advertising policy is not a boycott per se, but a systematic policy that screens potential advertising procurement.

Given the concerted attempts by some newspapers to delegitimise the idea of ethical advertising, it is understandable that there will be some hesitance to support the motion’s goal.

But this is an important emerging corporate responsibility issue that can’t be ignored, with the UN stating: “Elsewhere in Europe there has been a similar process of demonization taking place, but usually led by extremist political parties or demagogues rather than extremist media.” That’s how bad it is, and we can see its consequences.

The Co-op has always been at the forefront of social responsibility policy and practice. Here we have another opportunity to show our difference by moving quickly and bravely to address one of the big societal challenges of the day.

I ask this AGM to support the motion.