Press release – YouGov poll: Half of Brits say The Sun newspaper is bad for British society 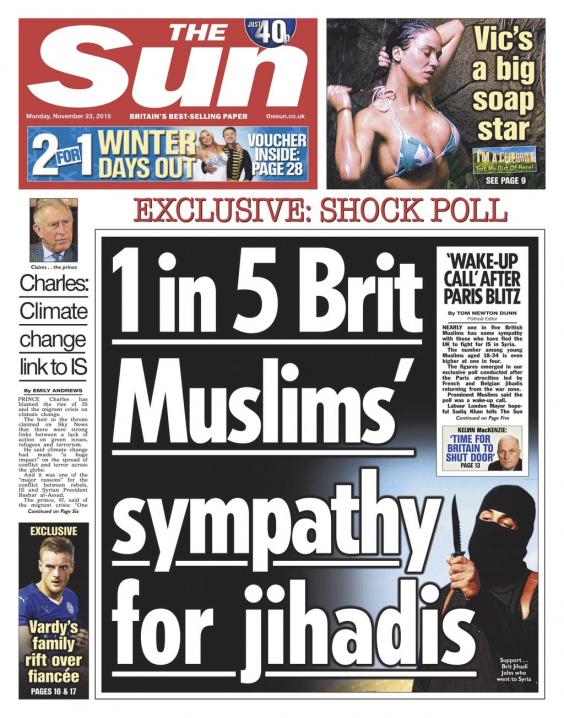 50% of the British public believes that The Sun newspaper has a negative influence on our society, according to a new YouGov poll commissioned by Stop Funding Hate. Just one in twenty people (5%) see the newspaper’s influence as positive.

The YouGov poll also reveals a striking, nationwide consensus: Across every British region, age group, and demographic polled, more people see The Sun’s influence as negative rather than positive. In the north of England, 53% expressed this view. Among young people aged 18-24, the figure was 57%. Figures for London reflected the national average.

Research by the European Broadcasting Union has previously found that the UK press is the least trusted in Europe[1].

Stop Funding Hate, a non-partisan human rights campaign which enjoys support across the political spectrum, was founded in 2016. The campaign was launched following a surge in anti-migrant hate crime that experts from Leicester University’s Centre for Hate Studies warn has been fuelled by inflammatory media coverage[2].

Stop Funding Hate focusses on the three UK newspapers who have been called out by the United Nations over their reporting: The Sun[3], Daily Express, and Daily Mail[4].

A study published in 2016 by the United Nations High Commission for Refugees (UNHCR) found that the Sun and the Daily Mail had a “unique” hostility towards refugees and migrants, when compared to other media outlets across five European countries.

“History has shown us time and again the dangers of demonizing foreigners and minorities, and it is extraordinary and deeply shameful to see these types of tactics being used in a variety of countries, simply because racism and xenophobia are so easy to arouse in order to win votes or sell newspapers.”

Stop Funding Hate supporters aim to counter the financial incentives that make media hate profitable. They do this by using their power as consumers to persuade companies to withdraw advertising from newspapers that demonise migrants, Muslims, LGBTQI people, and other minorities.

Stop Funding Hate is not seeking to have any publication removed from sale, or put out of business. Its aim is simply to end the hate, by persuading newspapers that running divisive and discriminatory stories targeting minority groups no longer makes sense in business terms. The campaign’s long term goal is to bring about a healthier, more accurate and fairer media by making media hate and discrimination unprofitable.

A spokesperson for Stop Funding Hate said: “With experts warning that the hate in our media is fuelling hate crime on our streets, there are good reasons to be worried about the impact of hateful and divisive coverage. We launched our Crowdfunder to demonstrate the strength of public feeling on this issue. This YouGov poll suggests that the concerns of Stop Funding Hate supporters are part of a broader, nationwide disquiet. This poll will come as a wake-up call to Sun and Daily Mail advertisers, demonstrating huge public concern about the impact of these newspapers on our society. We urge everyone who wants to see a healthier and fairer media to join Stop Funding Hate and help make a change in 2018”.

Dr Kerry Moore of Cardiff University, co-author of the UNHCR report, said: “It’s not a surprise that the public recognise the negative influence of these titles. Research has repeatedly shown press coverage in The Sun, and the Daily Mail to be characterised by patterns of reporting that habitually represent minority ethnic and religious communities including asylum seekers and refugees in negative, stigmatising and inaccurate ways… News is powerful and over time can inform ideas that become entrenched as ‘common sense’. However, the campaigning agendas of these tabloids encourage unjust stereotypes, which can heighten social anxieties about cultural difference, demonising minority ethnic, religious and migrant groups and playing to the most deep seated fears and insecurities of our times.”

Other tabloid newspapers in the study were also seen as more negative than positive, suggesting concern about the state of the UK press which crosses political divisions. The Daily Mirror was seen as having a negative influence by 31% of respondents, while 7% saw it as positive. The Daily Express was regarded as negative by 28%, and seen as positive by 8% of respondents. However in both these cases, a larger proportion of the public saw the newspapers’ influence as neither positive nor negative – 34% for the Daily Mirror, and 33% for the Daily Express.

Stop Funding Hate’s spokesperson concluded: “We hope that the Sun and the Daily Mail will reflect on why they are so widely seen as a negative influence. Until the situation improves, if you’re an advertiser, you’ve really got to think about whether these newspapers are the right fit for your brand.”

–  All figures, unless otherwise stated, are from YouGov Plc. Total sample size was 1,682 adults. Fieldwork was undertaken between 11th – 12th December 2017.  The survey was carried out online. The figures have been weighted and are representative of all GB adults (aged 18+).