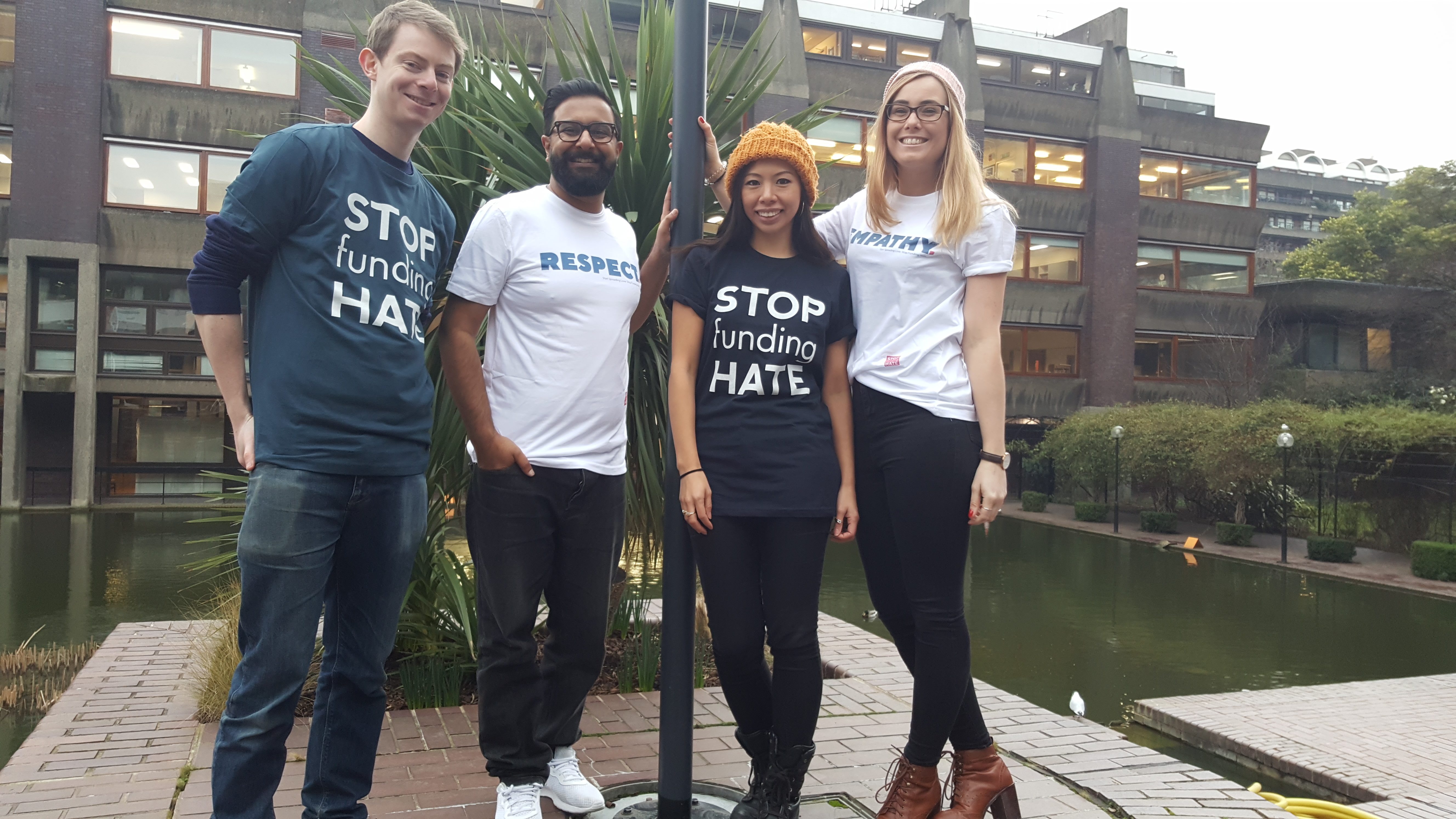 Stop Funding Hate is a community-driven human rights campaign, based on a philosophy of open, inclusive and participatory campaigning.

Our core values are truth, campaigning effectiveness and human rights. Our work is aligned with the principles and policies of the international human rights movement. We oppose all forms of discrimination without exception. We are committed to ensuring that all of our activities are consistent with the principles outlined in the Universal Declaration of Human Rights.

There are three members of staff at Stop Funding Hate, two of which are part time. We do not have an office so our running costs are minimal.

We also have a dedicated and passionate team of volunteers. They do excellent research, help run our website, provide invaluable advice and help the keep campaign going.

Stop Funding Hate is a Community Interest Company and we have a Board of Directors which manage the Company. The role of this Board is to serve and support the Stop Funding Hate campaigning community, by providing the organisational tools that it needs to fulfill its mission.The Board is responsible for ensuring that Stop Funding Hate CIC meets its legal obligations, and functions effectively as an organisation. It focuses on maintaining best practice in financial management, transparency and accountability, and human resources. All Board members must subscribe to and support Stop Funding Hate’s core values and mission.

The Stop Funding Hate Board members are:

Colin is an Investment Engagement Manager at the Friends Provident Foundation and previously was an Ethics Adviser and Campaigns Manager at the Co-op Bank and Co-op Group. He has given evidence to House of Commons select committee and has sat on several government, business and university advisory groups.

Iman is the Director of the anti-Muslim hate crime monitoring organisation Tell MAMA (part of Faith Matters CIC). She is also the founder of two not-for-profit organisations established to facilitate the socio-economic and political development of the Arab region and fulfils the role of International Facilitator, Trainer and Research Consultant for a number of national and international organisations.

Alex has worked in the voluntary sector since 2005. She currently manages the Public Engagement Fund at Wellcome Trust, and formerly worked for organisations including British Red Cross and Child Poverty Action Group. She also works as an academic, researching cultural responses to the HIV/AIDS crisis, and teaches gender and sexuality studies and literature at University College London.

Richard is the Director and co-founder of Stop Funding Hate, and sits on the Board as an Executive Director. He previously worked in fundraising for Amnesty International UK and the Child Poverty Action Group, and has been involved in human rights campaigning since 2001. Richard is the author of two books – Titanic Express (2006) and Don’t Get Fooled Again (2008).

Rosey is one of the co-founders of Stop Funding Hate. She is on the Board as an Executive Director and is also employed as Digital Manager for the campaign. She has worked in human rights for a number of years, in the UK and Latin America, specialising in digital communications and fundraising.