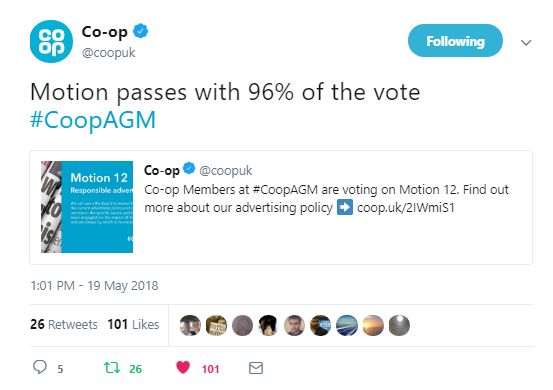 The Co-op Group Annual General Meeting has voted overwhelmingly in favour of a motion on ethical advertising, with a stunning 96% of members backing Stop Funding Hate.

The motion was proposed by Colin Baines, a former ethics adviser and campaigns manager for the Co-op Group, and a non-executive director of the Stop Funding Hate campaign, with the support of 200 other Co-op members.

What is Stop Funding Hate?

Stop Funding Hate is a consumer campaign that calls on companies to incorporate advertising into corporate social responsibility commitments. It has targeted advertisers in the Daily Mail, The Sun and Daily Express, citing specific criticism by the United Nations.

A YouGov poll commissioned by Stop Funding Hate in December 2017 found 58% of the public believe ‘companies should withdraw their advertising if it is placed next to content they think is racist, sexist, homophobic or xenophobic.’ 21% disagreed.

“Stop Funding Hate is following in the footsteps of other successful consumer campaigns, from the Living Wage and Fairtrade to animal welfare standards.”

The success of consumer campaigns

Responding to today’s result, Colin Baines said: “Congratulations to the Co-op, which is once again putting its values into action and leading the way on social responsibility.”

“Stop Funding Hate is following in the footsteps of other successful consumer campaigns, from the Living Wage and Fairtrade to animal welfare standards. All started as ethical consumer campaigns, quickly became corporate responsibility and responsible investment issues, and mainstreamed soon after. Ethical advertising is already well down that road, no matter how much acerbity and misrepresentation the campaign may elicit from Fleet Street.”

“Concern about the negative impacts of ‘fake news’ and ‘hate news’ on society is growing, and any business purporting to make a positive contribution to society must look at what its advertising procurement is funding.”

Stop Funding Hate recently received support from Jonathon Porritt, Founder Director of Forum for the Future, the UK’s largest sustainability charity, “I wholeheartedly support the Stop Funding Hate campaign. It’s right and proper to ask all companies intent on delivering a serious corporate sustainability strategy to recognise that where they put their advertising and marketing budgets should be an intrinsic part of that strategy. We have to persuade them to join up the dots here.”

Conservative peer Baroness Warsi, has also given her support, in a video for Stop Funding Hate saying “Campaigns like Stop Funding Hate are absolutely essential, the public has a right to vote with their feet and their money. As a Conservative, as someone who believes in the free market, I think it is a very centre right position to say the market should respond to this hatred by saying we find this unacceptable”.