Five ways that Stop Funding Hate supporters have made a difference

When we launched Stop Funding Hate, we weren’t expecting to see change on quite this scale. But here are five ways that we’ve made a difference:

1. There’s been a big drop in anti-migrant front pages in the UK press

We started our campaign in the summer of 2016, amid a huge surge in hate crime. Experts had been warning for years that the hate in the UK media was fuelling hate incidents on our streets – and yet the volume of hateful headlines kept growing. The situation had become so bad that three of our biggest newspapers – the Sun, Daily Mail and Daily Express – had been called out by the United Nations over their coverage.

Three years on, we’ve seen a remarkable turnaround. The relentless “drip drip” of anti-migrant front pages has all but stopped. Feedback from industry insiders suggests that concern among advertisers, under pressure from Stop Funding Hate supporters, has played a significant role in these changes.

2. The Daily Mail has revealed plans to “detoxify” – and the new Daily Express editor has talked publicly about the impact of the Stop Funding Hate campaign

After a string of advertisers pulled out, the Daily Mail last year changed its editor and revealed plans to “detoxify”. The Daily Express also has a new editor, who has committed to ending the paper’s anti-migrant stance, and publicly acknowledged the impact of Stop Funding Hate on his thinking.

There’s still a long way to go before we have a media free from discrimination – but together we’re showing that this kind of campaigning can work: Consumer engagement with advertisers can push back hate.

3. The advertising industry is now recognising that brands must avoid funding hate – with over $600 billion spent on advertising worldwide each year, they have the power to make hate unprofitable for good

When we first launched this campaign, many big brands resisted the very idea that they should try to avoid supporting hateful media content. Some even insisted it would be wrong to “make a judgement” about what their advertising is funding – however hateful or extreme.

Since then there’s been some serious soul-searching, and a major evolution in thinking within the advertising industry – and Stop Funding Hate supporters have been at the heart of this debate.

2019 has seen the launch of two major advertising industry initiatives, the Conscious Advertising Network (CAN) and the Global Alliance for Responsible Media. Both seek to address advertisers’ ethical responsibilities, including the need to tackle hate speech.

The UK advertising trade body ISBA has backed both projects, and endorsed the principle that “neither hate speech nor deliberately misleading fake news should be funded by brands”.

Stop Funding Hate is one of over 70 organisations now backing the Conscious Advertising Network – and helped draft the CAN voluntary code on hate speech.

All of this matters because globally over $600 billion is spent on advertising each year. If enough big brands join initiatives like the Conscious Advertising Network then they have enormous power to bring about positive change.

4. We’re part of a growing global movement pushing back against hate

When we began the Stop Funding Hate campaign, the UK was our primary focus. But since then we’ve learned that many of the problems we’re seeing in Britain are also global issues.

All around the world, the growth of online advertising has funded new, extreme media sites whose business model is based around hateful clickbait.

The same tactics that have been used to spread hatred and division in the UK are being replicated in dozens of countries around the globe – from Australia and Brazil to Italy, India and the US.

Many of the UK’s biggest advertisers are also global brands, so we know that we need to be able to work at an international level to influence them.

Within weeks of launching Stop Funding Hate, we began hearing from people who wanted to start similar efforts elsewhere.

And while social media has played a significant role in fuelling hate, it can also be a powerful tool for organising together to push back.

The extremists who thrive on division are also increasingly globalised. To help counter this, we’re building our own alliances with like-minded groups around the world – to share knowledge and tactics, and look for opportunities to co-operate. 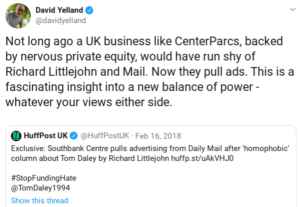 5. The United Nations has taken Stop Funding Hate’s message on board – and has recognised the need to de-fund media outlets that fuel hatred

One of our most important partners has been the United Nations Human Rights Office (OHCHR), who we’ve been working with since the early months of the campaign.

One founding purpose of the United Nations was to prevent a return of the hateful ideologies which led to the atrocities of World War II. Now with hate again on the rise around the world, the UN is becoming increasingly vocal in pushing back.

Through our work with the UN, we’ve been making the case for international action to tackle the big global factors that currently make hate profitable.

More recently, the United Nations Secretary General has spoken out about the financial factors fuelling hate, warning that “the best-selling brand in our world today is fear”.

Stop Funding Hate has since been working with the UN human rights office to explore ways of strengthening the global pushback against hate – including by sharing knowledge internationally of the “stop funding hate” campaigning model.

What next for Stop Funding Hate?

Over the past three years, a huge number of people have shared their time, insights and ideas to shape the development of the Stop Funding Hate campaign. Thousands more have spread the word via Facebook and Twitter, contacted advertisers directly, or donated to support the campaign financially.

Stop Funding Hate has always been a collective effort – and together we’ve helped to bring about significant changes. But amid a global surge in racism and extremism, there’s still an urgent need to address the economic factors that make hate profitable. Achieving long-term change will take a sustained effort, and the more support we have, the more we can do.

If you’re able to help build our movement tackling hate in the UK and internationally, please consider becoming a committed supporter and making a regular donation.