This is the second in a series of ‘What next for Stop Funding Hate’? blogs. You can read the first here. And please support our campaign to help make this work happen!

Changes in the UK press 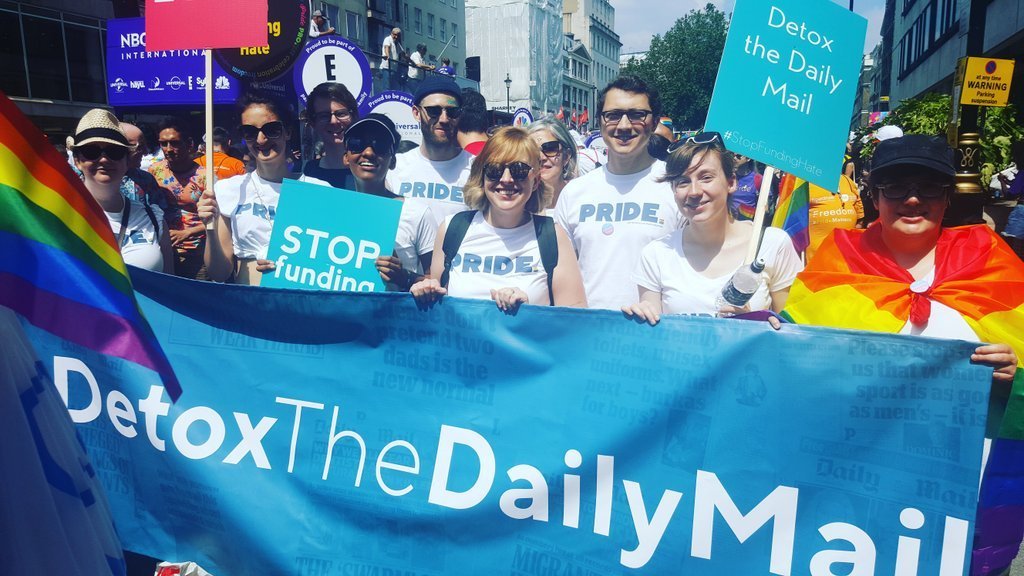 As highlighted in our previous blog, we’ve seen significant changes in the Sun, Daily Mail and Daily Express. It’s clear that when we come together and use our voices as consumers to challenge hate, we can make a massive difference. Stop Funding Hate’s next phase will include piloting a research project to score all major UK newspapers on hate and then publish a league table. We hope it will be a useful tool for consumers and advertisers alike – and create an incentive for further improvements.

Yet as newspaper sales continue to fall, the profits from hate are increasingly being made online. There has been a debate among Stop Funding Hate supporters about whether our campaign should now do more to address hate on social media.

When we launched Stop Funding Hate in 2016, we did so using Facebook. At the time, we mostly thought of it as a fun – perhaps even quite superficial – tool for sharing cat videos and keeping in touch with friends and family.

Since then, an astonishing picture has emerged of a platform that has been weaponised by far right extremists – and manipulated by governments – to sow hate, division and misinformation on a huge scale. There is widespread concern that these problems pose a threat to our democracy, and a grave danger to human rights across the world.

As mentioned in our earlier blog, the United Nations was our most pressing evidence in the beginning. And now, in 2018, Facebook has been called out by the UN – over its role in a possible genocide in Myanmar through the spreading of hatred on its platform.

During this campaign, Stop Funding Hate staff and volunteers have also directly witnessed shocking levels of hate and abuse on Twitter. Some of the most lurid and extreme examples of hate that we have seen – ranging from anti-Semitic genocide incitement to violent misogyny – have been online rather than in print. Earlier this year, Twitter was cited by Amnesty International over its failure to deal with misogynistic abuse.

Hate speech has proliferated online because – as with the press – hateful and inflammatory content drives ‘clicks’. This in turn increases advertising revenue.

With 32.6 million regular Facebook users in the UK alone – and over 2 billion worldwide, the weaponisation of Facebook to spread micro-targeted hate and misinformation could potentially be as damaging as hate within the traditional press.

Overall, Facebook now receives around 20% of worldwide digital advertising revenue – over $39 billion (£30 billion) in 2017. The Daily Mail raised a fraction of this during the same period. And while the Daily Mail’s ad revenue has been falling, Facebook’s advertising income was up more than 30% in 2018 compared to the previous year.

Like many newspapers, Facebook’s business model has involved profiting from hatred. There are worrying allegations that the company failed to apply its own guidelines in cases where a Facebook page was bringing in significant advertising revenue.

We know some Stop Funding Hate supporters are concerned that tackling hate on social media may distract from our focus on the UK press. But many others feel that this is an issue we cannot ignore. To tackle this will require additional resources. But if Stop Funding Hate is to achieve its mission of making hate unprofitable, then we believe we have to engage with the social media firms who increasingly dominate the global advertising market.

Big tech companies make billions each year from selling our “attention” to advertisers. So everyone who uses Facebook and Twitter is a part of this business model. But that also means that, as consumers of social media, each of us has a voice. And the more effectively we organise ourselves, the stronger our collective voice can be.

Stop Funding Hate is not calling for any change in the law, or for people to stop using Facebook or Twitter entirely. We know that leaving social media can be difficult for many who rely on it for work or to connect with friends and family. And we’ve seen for ourselves how much of a positive force these platforms can be. But just as we don’t want our money to fund hatred within the press, a growing movement of people around the world don’t want their consumer dollars – or their “attention” – to fuel hatred and extremism online.

Many big brands have already expressed concern. Some have even suspended their advertising on social media. And we know companies care about what their customers think. The more of us speak out, the more willing advertisers will be to use their clout to persuade Facebook, Twitter and other big tech firms to clean up their platforms.

This is an opportunity to address one of the biggest sources of hate in the world today – and to build alliances with like-minded groups across the world.

We’re building a movement to make hate unprofitable. Can you help by supporting our work?