A new phase for the Stop Funding Hate campaign

A new phase for the Stop Funding Hate campaign

Back in August 2016, when Stop Funding Hate began, the UK media was different. That year, and in the year before, the United Nations had warned about hate in the UK press, and in particular in the Daily Mail, the Sun and the Daily Express.

“History has shown us time and again the dangers of demonizing foreigners and minorities… it is extraordinary and deeply shameful to see these types of tactics being used… simply because racism and xenophobia are so easy to arouse in order to win votes or sell newspapers.” – UN High Commissioner for Human Rights, 2015.

There was widespread concern that the hate in our media was fuelling hate on our streets. And that’s what prompted hundreds of thousands of us to come together online and push back. It had reached crisis point and we could no longer stand by and do nothing.

What followed was amazing. After just four months, Lego pulled their adverts from the Daily Mail. And during 2017 more big brands joined them.

As more advertisers came on board (Center Parcs, Southbank Centre and Evans Cycles to name a few), the newspapers began to change. The Daily Mail stopped all online adverts on their comment pages. This year, they replaced their editor, and revealed plans to “detoxify”. The Express changed hands and the new editor admitted that its front pages had fuelled Islamophobic sentiment. Even the Sun has shown improvement.

Stop Funding Hate staff and volunteers check these papers every week – and we’ve seen a marked reduction in the number of extreme stories. It’s proven the concept that if we come together and use our voices as consumers – and social media users – we can make massive change. 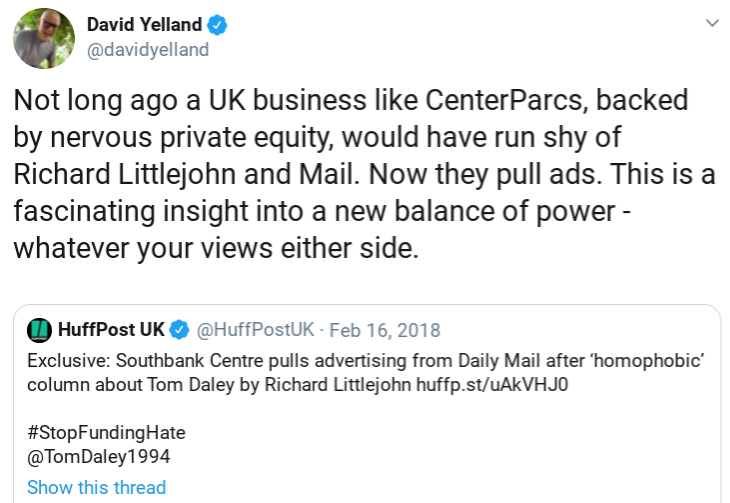 Stop Funding Hate has always been focussed on the most blatant extremes within the UK press – articles that clearly demonise minority groups and create a climate that puts people at risk, rather than simply being offensive or disagreeable. Now that the number of such extreme stories has decreased, we’ve been consulting with the Stop Funding Hate community to decide our next steps.

It’s clear that many Stop Funding Hate supporters believe there is still a way to go before our media is free from hate and discrimination. While supporters are encouraged to see the reduction in hateful stories in the Mail, Sun and Express, some worry that old habits may re-emerge if the pressure eases off.

Many point out that hateful, discriminatory and misleading stories can be a problem throughout the UK media. Many are concerned that coverage in some other newspapers has worsened recently. And there is ongoing disquiet about negative media narratives which may not cross the line into hate speech, but can still promote harmful stereotypes and fuel discrimination.

There is a strong view among supporters that Stop Funding Hate needs to keep up its focus on the UK press and push for further improvements.

Yet the campaigning tactics for challenging extreme, obvious forms of hate within the UK press will not always be appropriate – or effective – when trying to tackle more subtle problems. If we’re going to maintain our legitimacy and effectiveness, the changes that we’ve seen will require a new approach.

A new project to give every UK newspaper a “hate rating”

When we started this campaign, we relied on a very simple test: The three newspapers we were focussing on – the Sun, the Daily Mail, and Daily Express – had all been called out by the United Nations over their coverage. But this is also a blunt tool. The UN only speaks out in exceptional circumstances. And as they don’t issue regular reports on the media, it’s difficult to see a way of measuring change for either better or worse.

Currently there is no independent watchdog that objectively rates and scores media outlets. To develop a robust research system will take significant resources. But it’s now more than three years since the Sun and Express were called out by the UN High Commissioner for Human Rights – and two years since the UNHCR called out the Sun and the Daily Mail.

If we’re going to continue focussing on the UK press then we need to explore new ways of assessing media outlets. The first stage will be to commission an independent research pilot to evaluate the coverage of every UK newspaper, and begin developing a system for doing this on an ongoing basis.

*Updated* To make this happen – and to support the wider next phase of the Stop Funding Hate campaign – we’ve launched a new Crowdfunder appeal. Please pledge your support here.