#StopFundingHate is widening its scope

There’s still a long way to go, but we’ve proved that this model of campaigning works: Using our power as consumers to engage with advertisers can effectively tackle media hate. 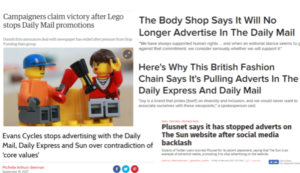 Over the past year, Stop Funding Hate has been looking at how to build on this, and develop our campaigning model. We’ve spoken to groups representing affected communities, people working within the advertising and media industries, and also to many of the people who’ve been involved with Stop Funding Hate since we launched in 2016.

We’ve also looked closely at the tactics that have been used successfully by other groups around the world working to challenge media hate – most especially the excellent work being done by Sleeping Giants.

And we’ve also been speaking with other international allies – including from the UN – to look at ways of building on the progress we’ve made in establishing advertising as a global business ethics issue.

Widening the scope of the Stop Funding Hate campaign

Now that the Daily Mail, Sun and Daily Express have all to some extent changed, there is less to distinguish their coverage of minority groups from that of other UK media.

From feedback we’ve had throughout our campaign, it’s also clear that toxic headlines have not been limited to these outlets: Hate and discrimination are problems across a wide section of the UK media industry. There are also ongoing concerns about hate on social media – particularly Facebook, YouTube and Twitter. It’s clear that focussing on three newspapers alone can only have a limited impact.

Having seen significant change from the first phase of our campaign, we think there’s now an opportunity for Stop Funding Hate to widen its scope. So while our principles and overall mission remain unchanged, Stop Funding Hate is extending its focus to enable us to challenge hateful content wherever it appears. 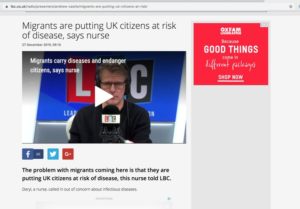 This work will run alongside – and complement – our new training programme aimed at sharing our tactics with community groups across the UK.

We’ll continue to set a high threshold for what we challenge – and in doing so we’ll draw on the resource that we’ve been developing here.

Recently, the Stop Funding Hate community has been engaging with Spectator advertisers after the magazine was called out by the Muslim Council of Britain for publishing “anti-Muslim propaganda”. A number of brands have since distanced themselves from the Spectator or removed their ads completely.

Stop Funding Hate supporters also recently contacted LBC advertisers who appeared on an article which repeated an inflammatory anti-migrant trope that has been widely used by the far-right to fuel xenophobia. The article was subsequently removed.

How you can get involved

A huge thankyou for supporting #StopFundingHate – and here’s to a hopeful and positive 2020!