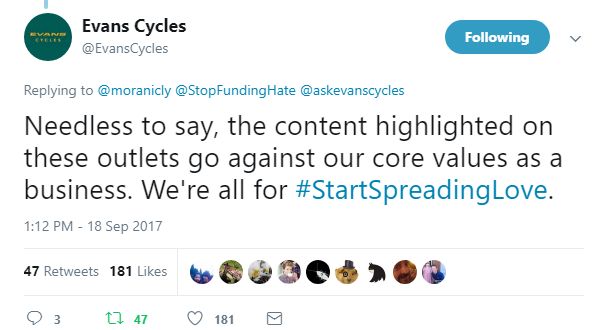 Leading UK hate crime experts have responded to the news that Evans Cycles and the clothing retailer JOY have ended their online advertising with several UK news sites accused of publishing divisive and discriminatory content.

“The actions of JOY and Evans Cycles, show that companies are wary of their brands being associated with news agencies that promote views that are either divisive or socially regressive by marginalising sections of our communities. Companies realise that divisiveness is not good for business, nor are platforms which promote these views, which if such companies associate with, might also taint their own brands.”

“Increasing numbers of advertisers are beginning to recognise the social impact of their marketing and it is encouraging to see more and more companies with proud ethical values taking a stance on where they choose to promote themselves. By distancing themselves from the sensationalist newspaper headlines which reinforce tensions, stereotypes and divisions between communities, those companies can play their part in creating a more tolerant, kinder society.”

Evans Cycles last week announced that it is blacklisting the Sun, Daily Mail and Daily Express from its online advertising programme.

Stop Funding Hate supporters had earlier raised concerns with the company over articles on which its advertisements had featured, including a piece in the Sun which appeared to trivialise the ethnic cleansing of Rohingya Muslims in Burma.

This follows a similar decision by clothing retailer JOY, who revealed this month that they were ending advertisements on the Daily Mail and Daily Express websites over “racist” and “transphobic” content.

JOY and Evans Cycles join a growing list of UK companies that have taken a positive stance on their advertising.