1. Go to an inflammatory article on the Mail, Sun or Express website and take a screenshot.
2. Tweet the advertiser with a copy of the screenshot, and a polite and friendly message highlighting where their advertisement is appearing.
3. Tag @StopFundingHate in your tweet, to help us keep track. If the company has a hashtag that it regularly uses (for example #TheCoopWay or #SpendItWell) please include that too.

This tactic has been pioneered by the Sleeping Giants campaign, which has so far persuaded over 3,000 advertisers to stop advertising on the controversial website Breitbart. 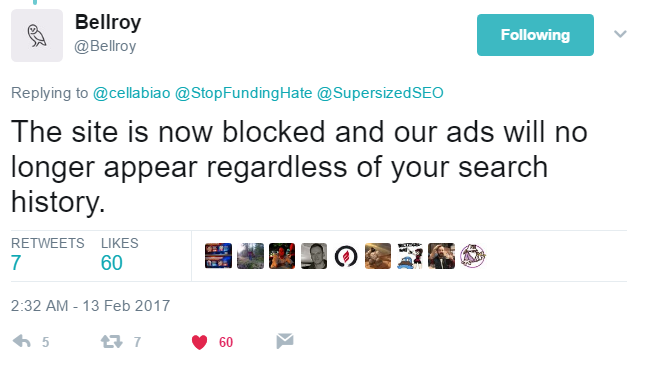 How does it work?

A lot of online advertising is sold via an intermediary (often Google), and placed automatically through a system known as “programmatic” advertising. This means that an advertiser typically won’t know that their online ads are appearing alongside a hateful or divisive article. They may even be unaware which website their ads are appearing on.

Through the intermediaries, ads are placed on sites in a number of ways. It could that the site has ‘keywords’ on it, such as ‘holiday’ and ‘travel’, so a travel company advert could appear on it. Or, it could that adverts appear on publications that are specified as having the right audience for the company.

These intermediaries, including the Google advertising network, allow companies to block particular websites to ensure that their adverts won’t appear – and to stop their money from being passed on to that website.

We’ve already contacted a number of companies that didn’t know that their advertising was appearing on the Daily Mail, Express or Sun websites, and took action once we told them.

But the more of us that take this simple action, the more of an impact we will have. So if you have a Twitter account and five minutes to spare, please get involved!